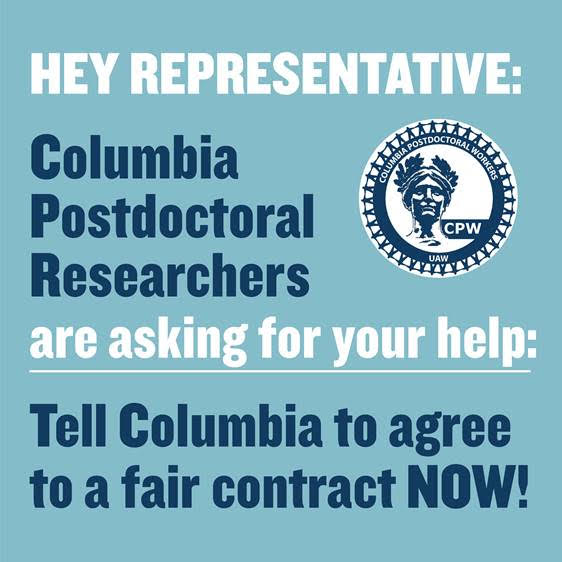 In an ongoing effort to  bargain a fair first contract by April 6th 2020, we asked to Representatives Meng, Nadler, Espaillat, Ocasio-Cortez, and Lowey to support our efforts to secure a fair agreement.

March 26th: Our Bargaining Committee sent a letter to the Administration regarding the COVID-19 crisis. 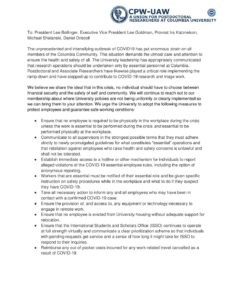 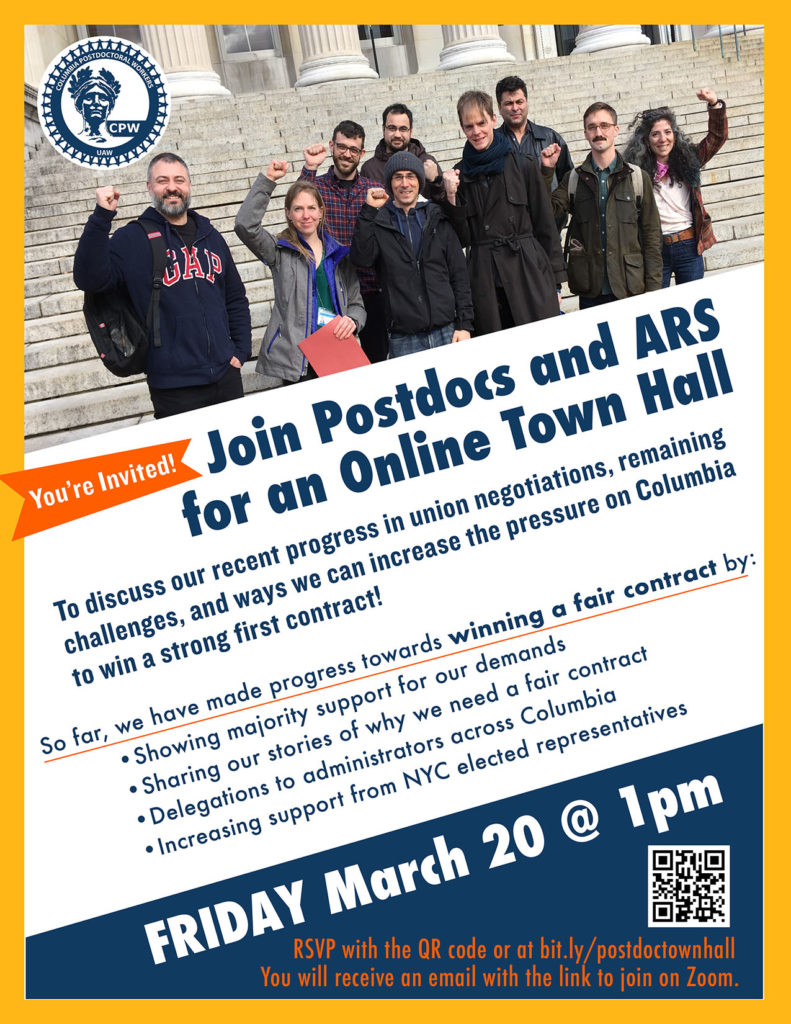 With the ongoing COVID-19 outbreak only becoming more critical, we converted our online town hall into a space to discuss how the crisis is affecting researchers, bargaining and what we can do as a union to support each other and the broader community. Postdocs and Associte Researchers continue filling out our survey in regards to how COVID19 is affecting us and our research so our elected bargaining committee can have a better understanding of how researchers are being impacted.

March 13th: Our bargaining committee sent a to the Columbia Board of Trustees for a fair contract by the April 6th deadline. 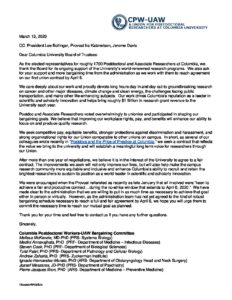 On Friday March 13th, 2020 our elected bargaining committee sent this letter to the Columbia Board of Trustees to communicate our willingness to continue to bargain a fair agreement, either in person or virtually, before the April 6th deadline. 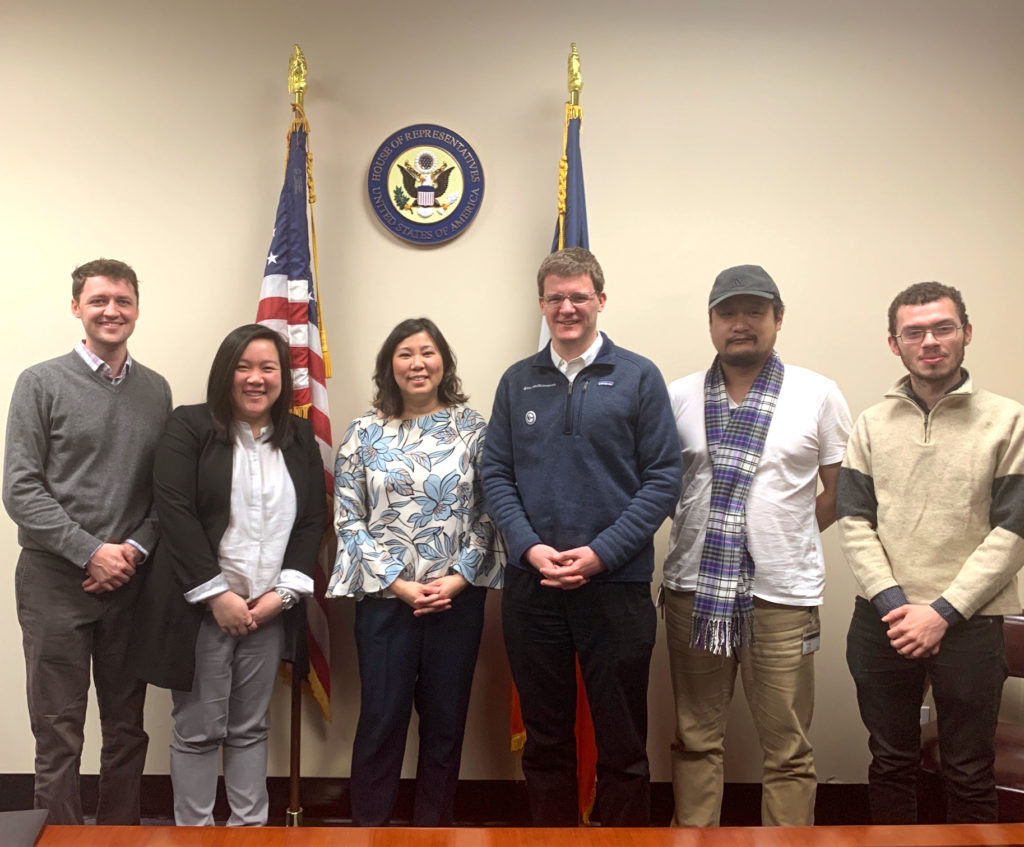 A delegation of researchers from our union and GWC-UAW Local 2110 Graduate Workers of Columbia, met with US Representative Grace Meng to explain our bargaining goals. Congresswoman Meng sits on the House Appropriations Committee that oversees the federal budget funding most of the research at Columbia.

January 16th: CPW members delivered an open letter calling on Columbia to raise our salaries. Click to read the letter 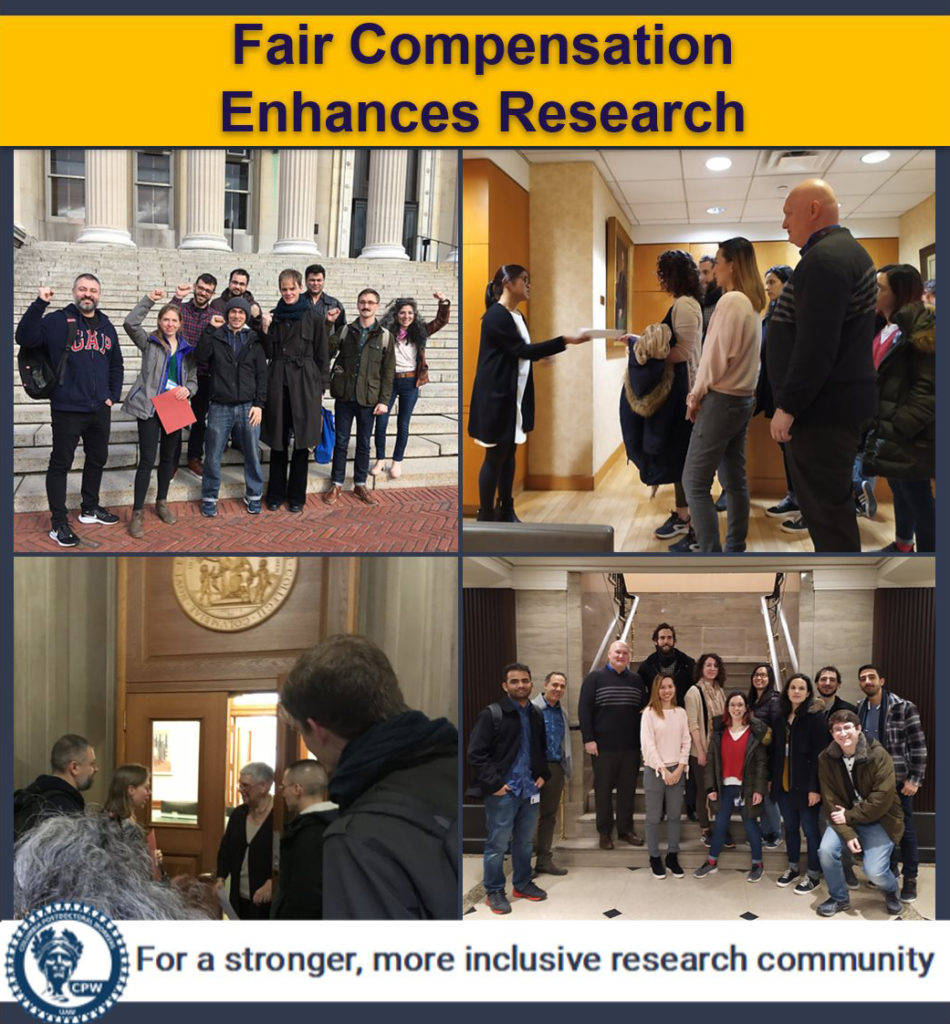 Columbia’s lagging compensation practices undermine quality research. We delivered a letter from researchers spanning the entire Columbia community to Provost Katznelson and Dean Goldman urging the administration to do better. 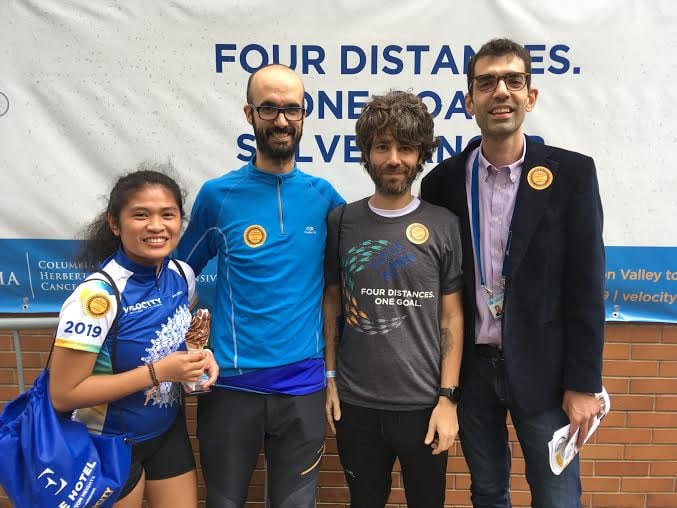 Postdocs and Associate Research Scientists joined other Columbia community members at the annual Velocity Ride. We are excited to be negotiating improvements to our working conditions so that we can produce better cancer research. Better Working Conditions = Better Research!

May 2019: CPW-UAW and GWC-UAW delivered a letter to the President’s Office signed by a majority of Postdocs, Associate Researchers and Graduate Workers for stronger protections against sexual and all forms of harassment, bullying and discrimination. Click to read the letter 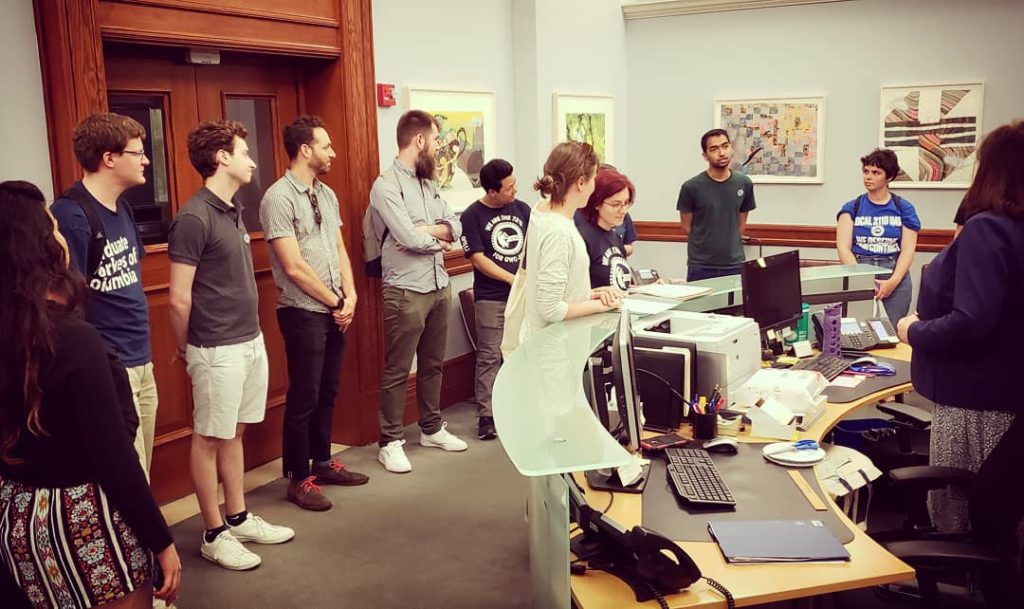 On May 20th, representatives of both CPW-UAW and GWC-UAW delivered a letter signed by a majority of Postdocs, Associate Researchers and Graduate Workers calling on Columbia to negotiate with us a for union contract that includes stronger and enforceable protections against harassment and discrimination, as this strong demonstration of support by a majority of academic workers at Columbia confirms. 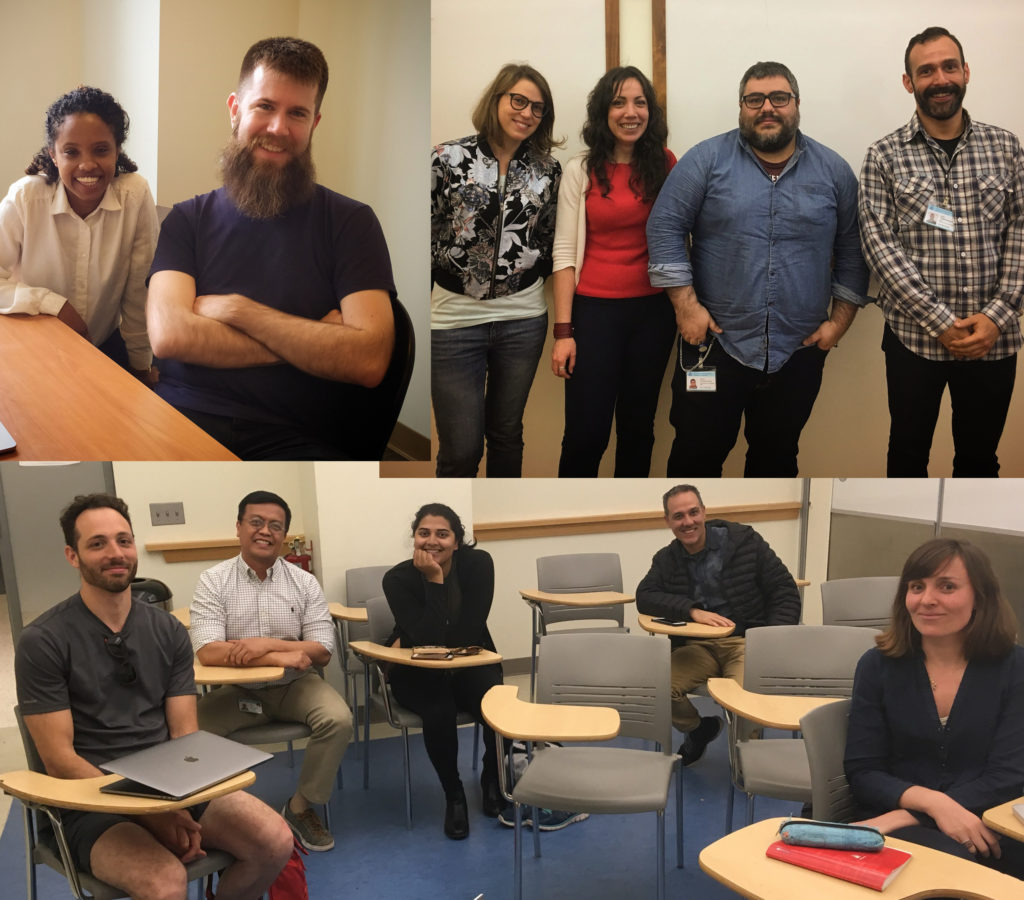 Postdocs and Associate Researchers formed several Working Groups: Parents, Compensation, Housing, Healthcare, International Researchers and Harassment, Bullying and Discrimination, to help the Bargaining Committee analyze the feedback given in bargaining surveys filled by a majority of researchers and analyze the standards in other universities and union contracts. 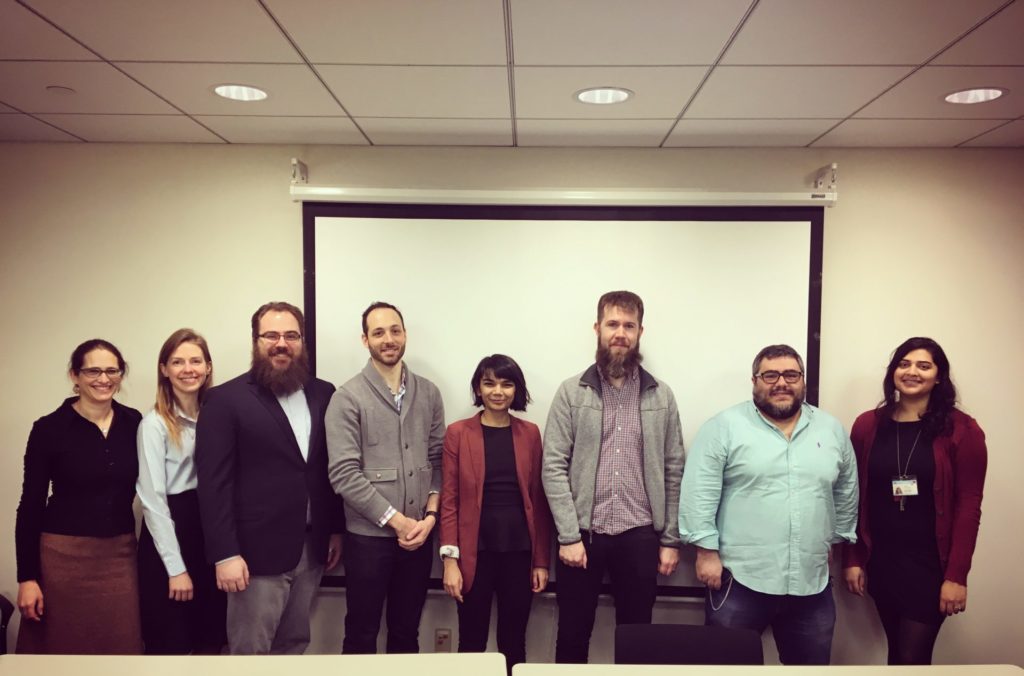 On February 25th, our Bargaining Committee sat down for the first time with Columbia’s administration and presented our bargaining goals, strongly ratified by 98% of CPW-UAW members. This is an undeniable milestone in our history to negotiate for improved and more secure conditions to do our research.

February 13th: We Stand in Solidarity with Nurses at Presbyterian Hospital 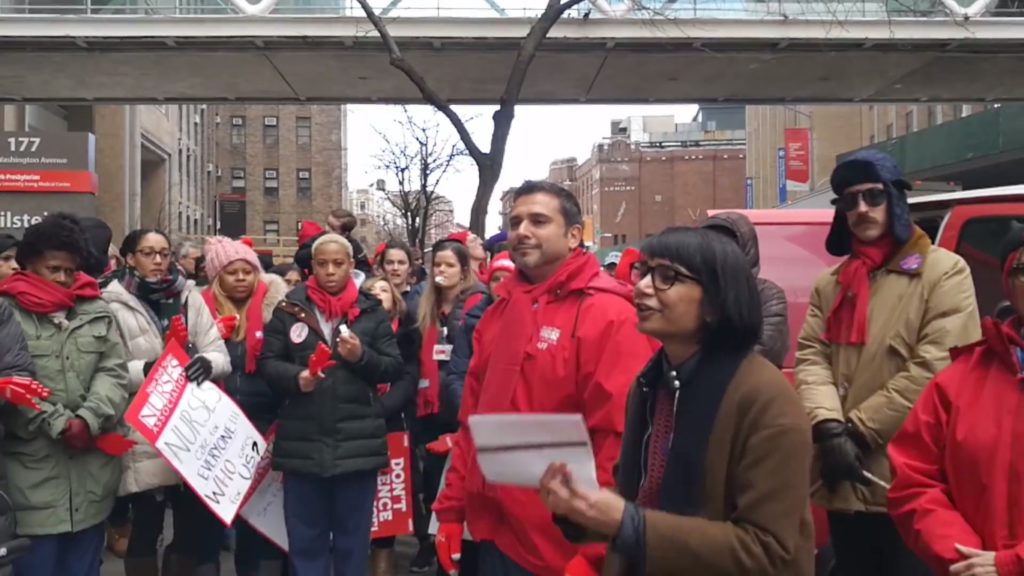 Our Bargaining Committee joined  Presbyterian Hospital nurses on their picket line as they fought for a fair contract.

December 2018: Columbia requested withdrawal of the request of review of our Union and majority of Postdoctoral Researchers have filled out the Bargaining Survey. Click to fill one!

Columbia, in accordance with the agreement, requested withdrawal of the request for review of our union, which was granted by the National Labor Relations Board on December 4th. Now that a majority of Postdoctoral Researchers have filled out the Union Bargaining Surveys we are getting ready to start Bargaining soon!! The bargaining survey allows everyone to democratically shape what improvements our union bargains for. Having a majority of postdoctoral researchers fill out the bargaining surveys will allow our bargaining committee, to be in the best position to negotiate a strong contract.

November 2018: Columbia offers a pathway to bargaining and CPW and GWC voted in favor. Click to read it. 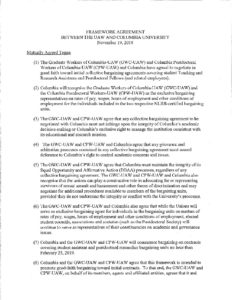 As a result of all of our hard work over the last few years and GWC’s  strike (the Grad Union) Columbia University proposed a framework agreement to recognize and bargain with both Unions. Postdoctoral researcher voted 95% in favor of the agreement which also was approved by the Grad workers. We keep moving towards bargaining no later than February 25th 2018!! 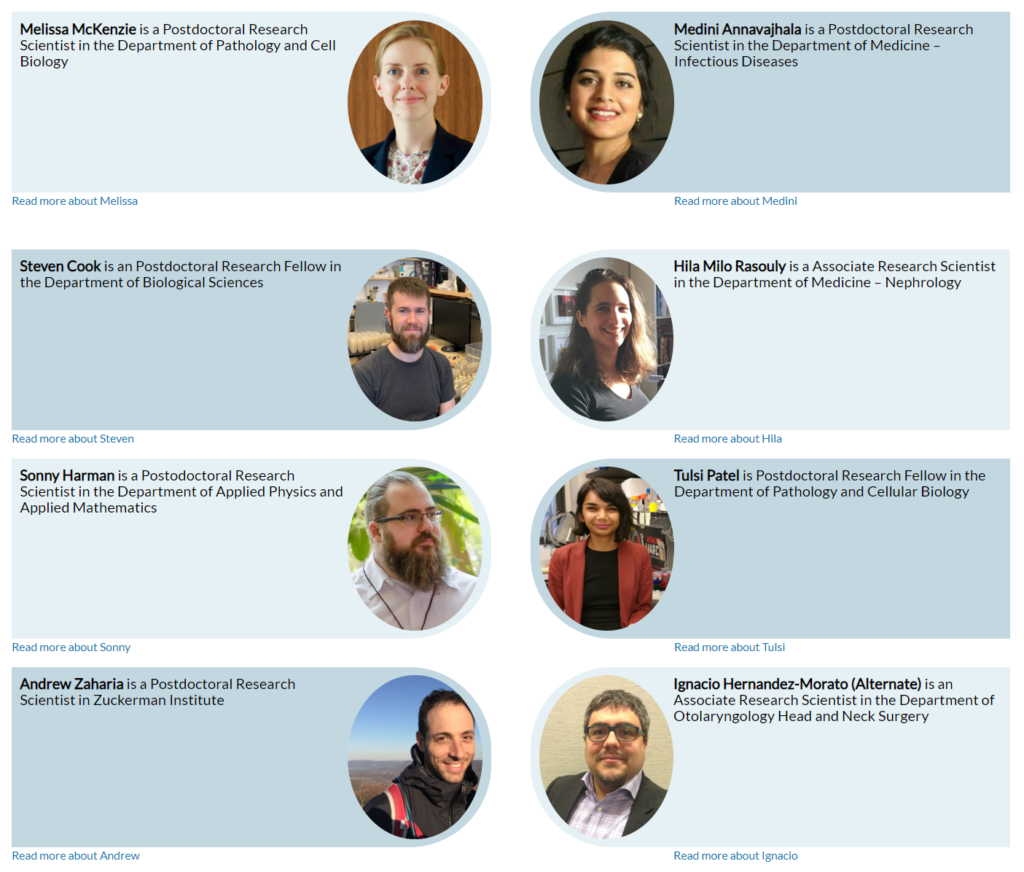 After holding Town Halls across campuses discussing about the best composition of our Bargaining Committee to ensure we can win a first strong contract, we elected seven of our peers (plus an alternate) to represent us in the bargaining table with Columbia.

October 26th 2018: Columbia tries again to stop our democratic mandate to for a Union. Click to read the letter 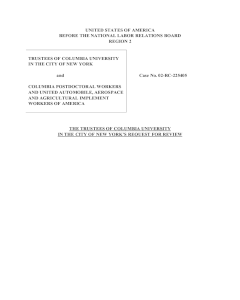 Columbia launched another effort to avoid bargaining with our union by filing a “request for review” asking the National Labor Relations Board (NLRB) in Washington, DC to reverse the recent certification of our union by the regional NLRB in New York City.  In the mean time our historic election in the first private university in the country gained national press attention as well as support from elected leaders right here in New York City.

October 10th: 18 members of the Progressive Caucus of the New York City Council urge President Lee Bollinger to respect our Union. Click to read the letter 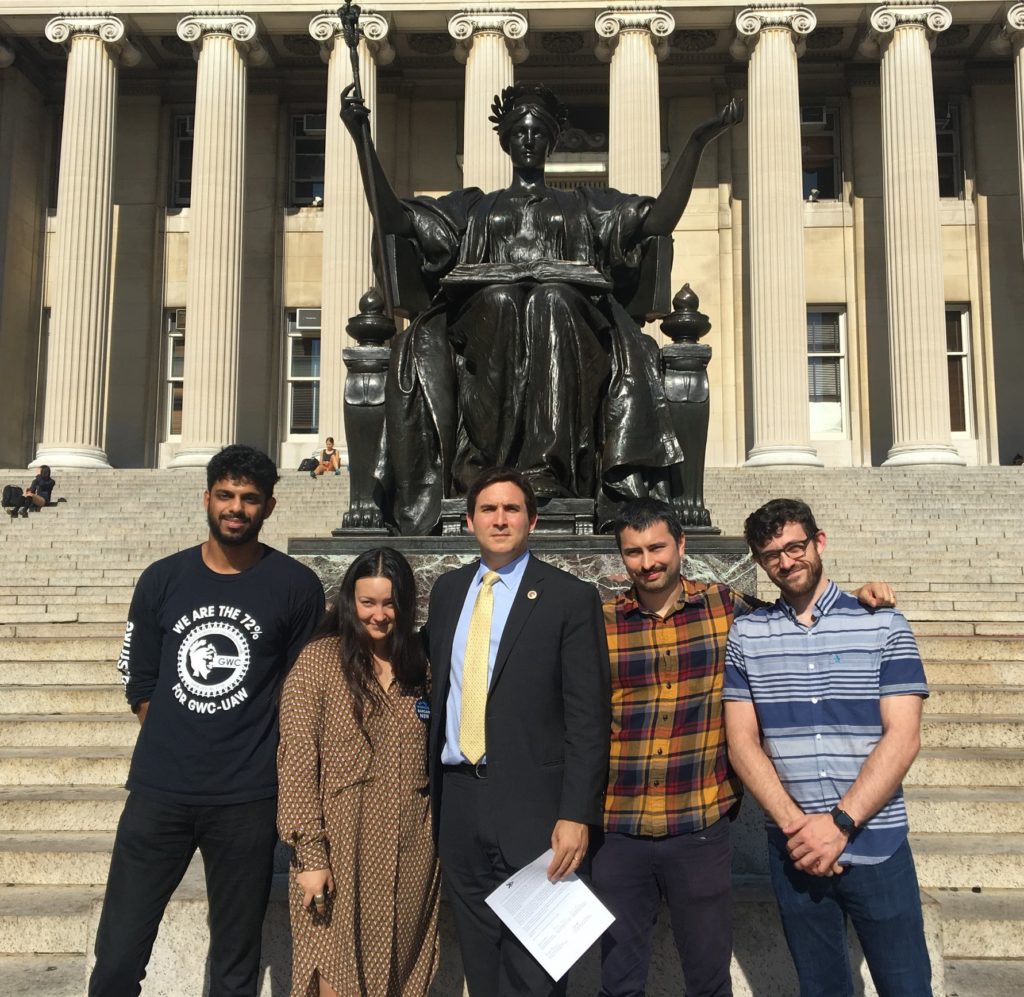 We joined Ben Kallos in delivering a letter signed by 18 members of the Progressive Caucus of the New York City Council to President Lee Bollinger urging the University to respect our 68% mandate for collective bargaining and to bargain with the GWC-UAW Local 2110 Graduate Workers of Columbia.

October 2nd and 3rd: We voted Union YES!! Click to read why.

Leading to the election we hold Town Halls and hundres of conversation across campus and finally on October 2nd and 3rd we voted by an overwhelming 68% (729-yes to 339-no), in favor of Columbia Postdoctoral Workers-UAW as our union.

September 2018: The NLRB set dates for our election on unionization. Click to read the full NLRB decision. 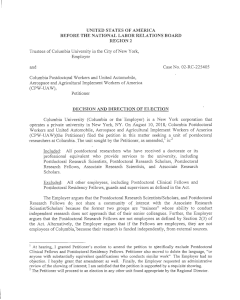 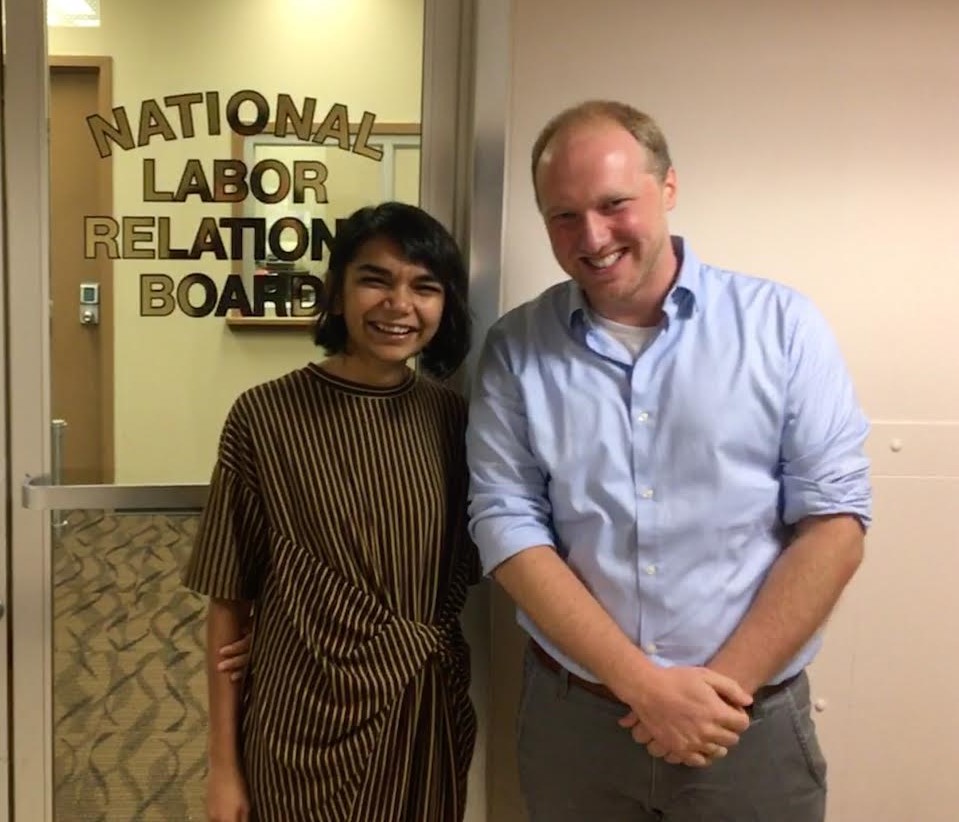 August 2018: Columbia Argues that Postdoctoral Researchers are not employees at the NLRB. Click to read their “proof”. 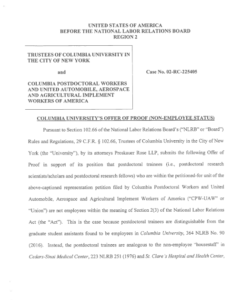