*1. Now that our contract is in effect, what happens next?

We will now work to ensure that our new contract is consistently enforced.  If you have a workplace problem, or believe the University is not respecting the rights we negotiated in our contract, please contact the Union at columbiapostdocunion@gmail.com and we will work with you to address the situation.

As a Local Union in the UAW, we will also now take various steps to establish the governance and representative structure of our union. There will be many opportunities for union members to get involved in these activities; click here if you would like to get involved.

2. What are some of the next steps in establishing our Local Union and how can I help?

As we move ahead with setting up our Local Union, it will be important for members to help with the following:

3. Why should I become a member of the Union?

Click here to sign up for CPW-UAW Local 4100.  Signing up as a member strengthens our collective voice as Postdoc and Associate Researchers at Columbia and beyond.  Consistent majority support and participation enabled us to win improvements in our first contract, will enable us to most effectively enforce our rights under the contract, empower us to negotiate future improvements, and enhance our ability to advocate more broadly on issues like science funding, international workers’ rights and civil rights alongside 80,000 other academic workers in the UAW. Signing up also makes our union more democratic and inclusive since membership gives you the right to participate in the governance of our local union, through elections, votes, committees, and other processes.

4. How do I become a member of the Union and how much are membership dues?

5. Why do we pay membership dues? How are dues allocated and used?

It takes resources to maintain a strong union and engage in effective representation. Dues provide such resources (see pie chart below for breakdown). How dues are spent by our Local Union is determined democratically by union members.  Consistent with the UAW Constitution, our Local Union will have regular membership meetings where financial reports and priorities are presented and discussed.

Most of the work of enforcing the contract and representing membership is carried out and financially supported by the Local Union.  A UAW Local Union like ours typically retains more than 1/3 of membership dues for such work, which includes:

An additional 1/4 of dues goes to the International UAW’s General Fund, which provides support for contract enforcement and future contract negotiations, as well as new organizing campaigns. The remainder of dues goes to the UAW Community Action Program (3%) and UAW Strike and Defense Fund (44%, though as long as the fund stays over $500 million, which has been the case for many years, Local Unions receive a “rebate” such that the Local retains about 37% of all dues money).

The portion of dues allocated to the International UAW supports Local Unions and members in a variety of ways, such as: 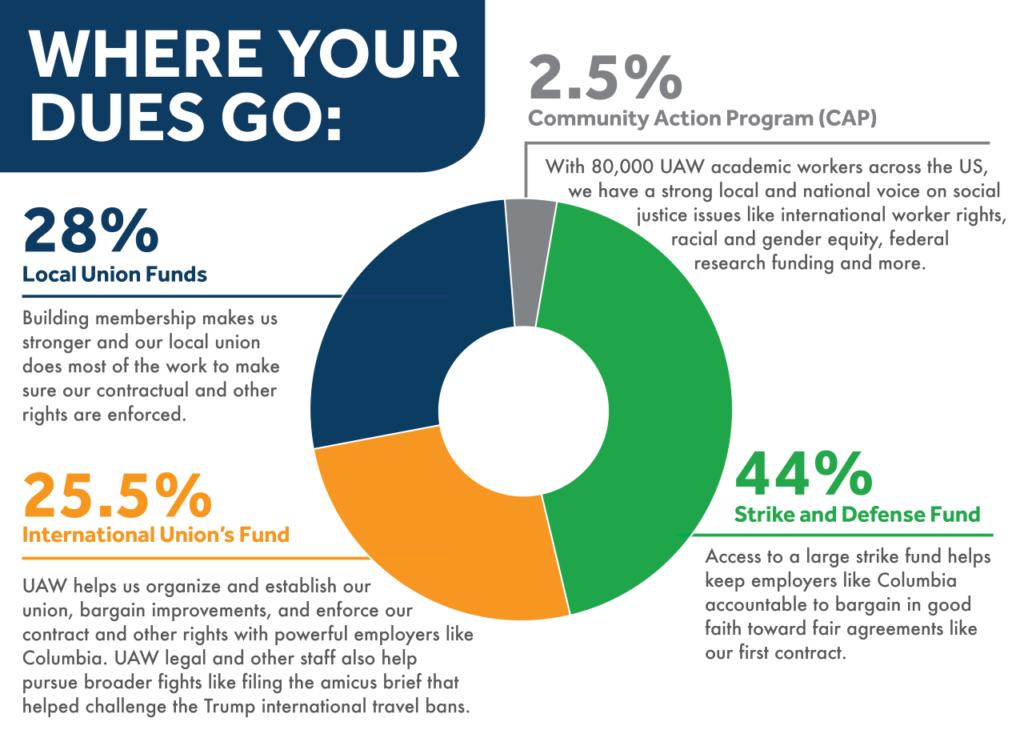 6. Do I automatically become a member if I signed an authorization card at some point during our campaign?

No. Those who signed CPW-UAW authorization cards during our organizing and contract campaigns are not automatically considered members of the Union.  You must sign a CPW-UAW Local 4100 membership card to become a member.

7. Does the contract mean I am required to be a member of the union and pay dues? I heard I have to pay either way.

No one can be required to become a union member. Since the union is obligated to represent all employees in the bargaining unit regardless of membership, it is a condition of employment under our agreement with Columbia that individuals share the cost of representation.  Individuals must therefore either become a member and pay dues, or, if objecting to being a union member, pay a  “fair share” fee to cover the cost of representation. The objecting, non-member fee is calculated annually by the Union according to legal requirements, but historically tends to be roughly 85% of membership dues. Given how small the difference is between dues and fair share fees (likely to be roughly $16 per month for someone making $66,100), we strongly encourage all researchers to sign up as members since it strengthens our collective voice.

8. How can I participate in decision-making in our Local Union?

One of our next steps will be developing Bylaws to describe the governance structure of our Local, including how we make decisions collectively in our union. The bylaws will be voted on by all members in good standing. According to the UAW constitution, and as has worked at other UAW academic worker Locals, the members are the highest authority and elect an Executive Board (President, Vice-President, etc.) to represent them in between membership meetings. Local Unions typically also elect a number of Stewards to help organize and enforce workers’ rights under the contract.

9. Who is currently in the Union leadership?

We elected officers for our Local Union in September 2020. Click here to read statements from our elected representatives.

10. What are the Officer positions?

Consistent with the UAW’s Constitution, our Local Union will have an executive board made up of the following 9 officers: President, Vice President, Financial Secretary, Recording Secretary, Trustees (3), Sergeant-at-arms and Guide.

11. What are Union Stewards?

Stewards are Postdocs and ARS representatives who are elected to help with organizing and mobilizing in their respective districts, enforcing the contract and assisting with workplace issues and grievances, and ensuring good communication across Columbia.

All stewards will receive training on organizing and grievance handling, and have the active support of the Executive Board and union staff in carrying out their duties. Electing stewards to assist with contract enforcement and organizing is an important next step for our Local Union.

12. How do I contribute dues or fair share fees?

Under our contract with Columbia, the university administration agreed to deduct dues and fair share fees if authorized to do so by the researcher. This was an important success in bargaining in that it helps ensure that we can quickly and effectively pool our resources so that our Local Union is strong. Most researchers choose this method because it is less burdensome for both the individual and for the Local Union. This online form allows you to choose between membership and fair share fees and authorize deductions.

A second option is to through electronic payments directly to our Local Union. If you would like to set this up, please send us an email at columbiapostdocunion@gmail.com.

Finally, you can also fulfill this condition of employment by sending a monthly cheque, made out to “Columbia Postdoctoral Workers-UAW Local 4100” to the following address, with the month(s) for which you are paying and “Dues” or “Agency Fees” in the memo line:

Dues are an important source of power for our Local Union, providing independent resources to help with enforcing our contractual rights, and campaigning to win more improvements. If you have any questions about paying dues or fees, always feel free to get in touch with your steward or elected union leadership.