Vote on the proposed framework for Bargaining

If you have not received a link to vote please email us at columbiapostdocunion@gmail.com

After more than three years of organizing by postdocs to establish our union, Columbia University has proposed a framework agreement to recognize and bargain with Columbia Postdoctoral Workers-UAW. This proposal would only go into effect if it is voted on and approved by CPW-UAW postdocs and associate research scientists and scholars. You can read the proposed framework agreement here.

The Bargaining Committee unanimously supports this proposed agreement and would like to recommend that CPW-UAW supporters vote “yes.” These are the main reasons why we support the proposed framework:

We believe we can generate a strong campaign for a fair contract by April 2020, but reserve the right to take action if the administration does not negotiate in good faith in that time. This proposal by Columbia is a direct result of our overwhelming vote in support of unionization and we encourage all union supporters to vote.

Read the bargaining committee’s summary of the proposal here.

Eligible voters would be Columbia Postdoctoral and Associate Researchers who have signed a CPW-UAW authorization card or filled out our Bargaining Survey and are currently employed by the university in one of the categories outlined by the NLRB decision (i.e. Postdoctoral Research Scientist, Scholar and Fellows, Associate Research Scientist and Scholars). If you meet the above criteria and have not signed up for the Union previously, you may do so here by filling out our Bargaining Survey.

The NLRB just finished counting ballots and we voted by an overwhelming 68% (729-yes to 339-no), in favor of Columbia Postdoctoral Workers-UAW as our union.

We will have more information soon regarding next steps in our campaign. For now, we want to thank everyone who has participated in this historic election and for the last two years leading up to it. Together, we have truly generated an unprecedented discussion of the importance and value of our work as postdocs and associate research scientists.

If you have not yet done so, please take a few minutes to fill out the postdoc union bargaining survey.

The more of us who participate in the bargaining survey, the more power we will have to negotiate a strong, representative contract with Columbia.

Information regarding voting procedures and eligibility
The voter list includes postdoctoral research scientists/scholars, postdoctoral research fellows, and associate research scientists/scholars. Each voter has been assigned a primary voting location, based on Columbia’s determination of each voter’s physical work location. If you are an eligible voter but vote at a location other than your primary location, you will be allowed to vote at that location, but your vote will be subject to challenge. This is a process that the NLRB follows to verify that people do not vote at more than one location. See more information below about challenged ballots.What if I believe I am eligible, but the NLRB says my vote will be vote will be “subject to challenge”?
“Challenged ballots” are placed in a separate envelope so that questions about the voter can be resolved after the voting is over. There are two general categories of “challenged ballots.”
October 2nd
October 3rd 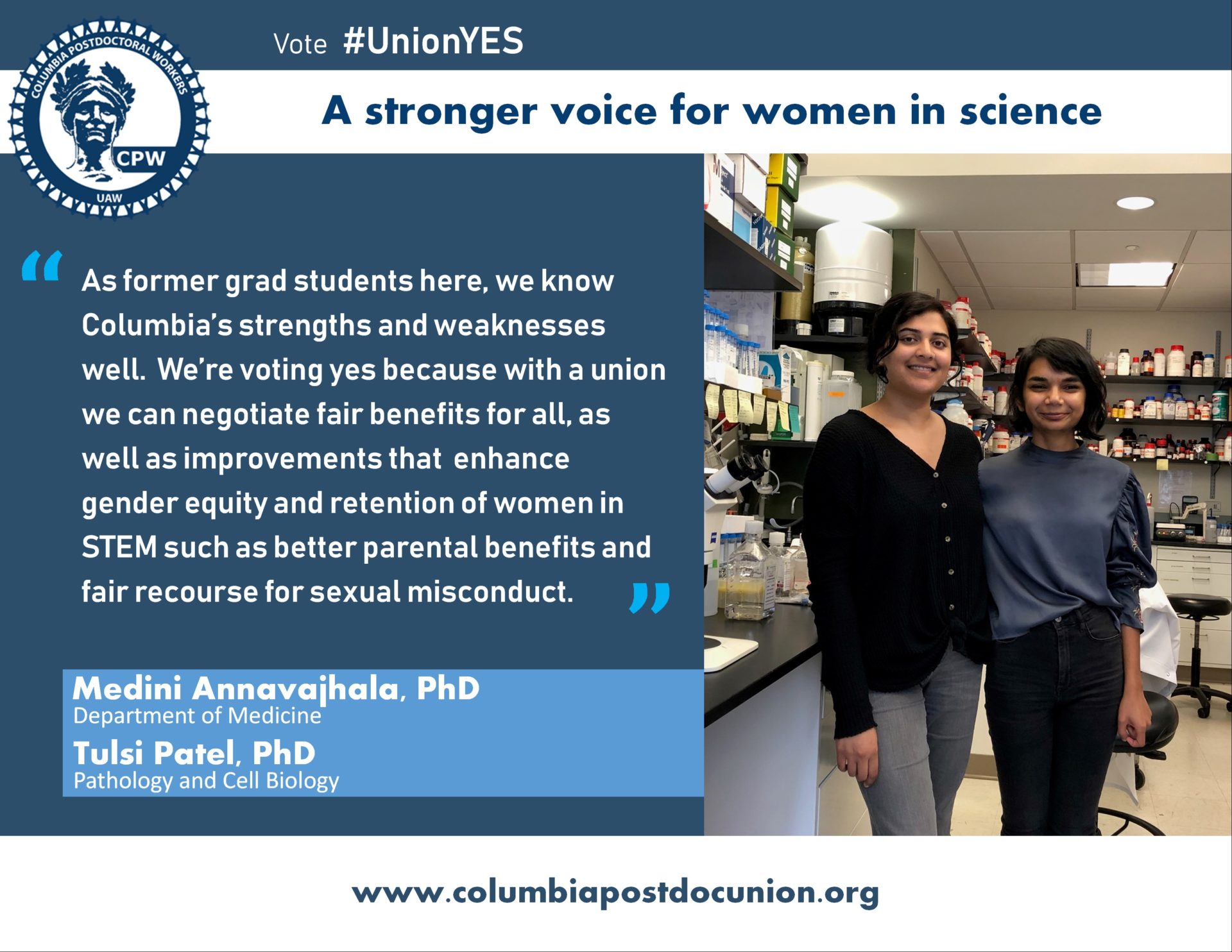 On October 2 and 3, we have a historic opportunity to establish a stronger voice to negotiate improvements in our working conditions and create a more inclusive research community at Columbia by voting “yes” for CPW-UAW as our union. Joining together with 75,000 other academic workers in the UAW has become more urgent than ever as the Trump administration wages unprecedented attacks on science, sexual harassment protections, and the freedom of international scholars.

We have a clear choice in this election. Voting “yes” means the Columbia administration would have a legal obligation to negotiate postdoctoral researcher conditions through collective bargaining with CPW-UAW and to secure any agreements on improvements or maintaining current benefits in a binding contract. Without collective bargaining, Columbia administrators far away from our labs decide unilaterally whether, when and how to address problems like the quality and affordability of health benefits for ourselves and our families, whether to offer salary increases that match cost of living or our peers in New York City, uneven enforcement of family leave, or ineffective recourse for sexual harassment, just to name a few examples.

In thousands of conversations, numerous town halls and other meetings, postdoctoral researchers have already identified a long list of issues to address in bargaining—consider the thoughts of our colleagues and these basic reasons to vote “union yes” on October 2 and 3.

Our research community does better when we join together

We have already benefited from the growing movement of academic workers organizing across the United States. For example, after years of unpredictable and insufficient pay increases, the one significant pay increase we received in recent years came not from Columbia’s leadership, but from concerted efforts by UC postdocs and others to create new US Department of Labor regulations mandating higher salaries for all US postdocs. Important progress, but we can still do better—Columbia’s current minimum postdoc salary of $50,123 still lags 17% behind the new $58,661 minimum at Mt. Sinai. With a union, we would have a better chance at negotiating fair compensation that reflects our value and keeps pace with the unusually high cost of living in NYC.

UAW Members across NYC – Columbia and MoMA to NYU and Legal Services – reach out to say “union YES!”

Letter to the editor: UAW is a strong ally for international students and postdocs 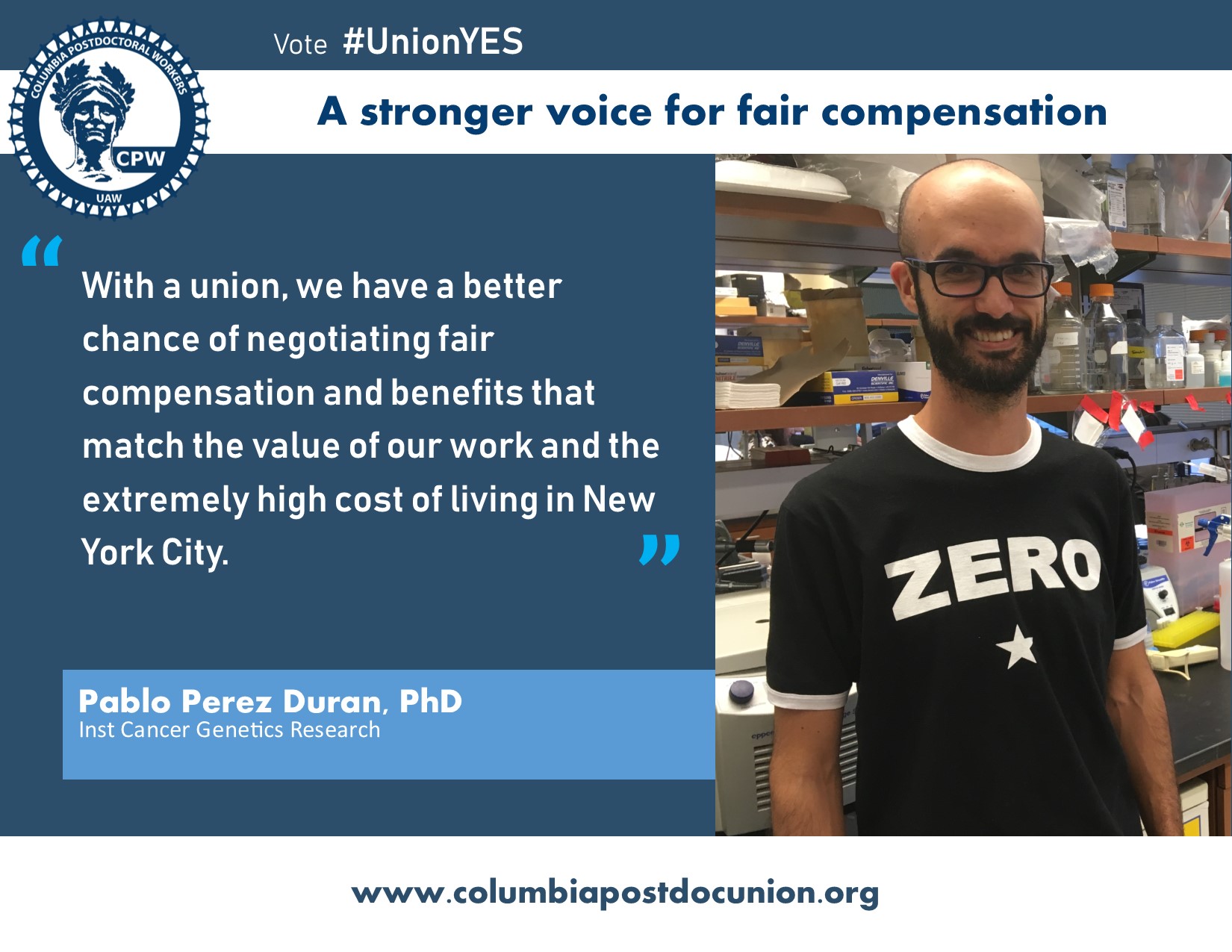 We all care deeply about our research, which is why we came to Columbia in the first place. However, too many postdocs report problems exercising policies that supposedly exist, such as maternity leave, childcare subsidies, protections against sexual harassment and workplace discrimination, timely reimbursement of work-related expenses, or managing our finances given the gaps in our health insurance coverage. This kind of unpredictability and the lack of clear, effective and efficient recourse get in the way of focusing on our research. The clarity, predictability and security of a contract will enable us to make sure that we can focus our energy on quality research. 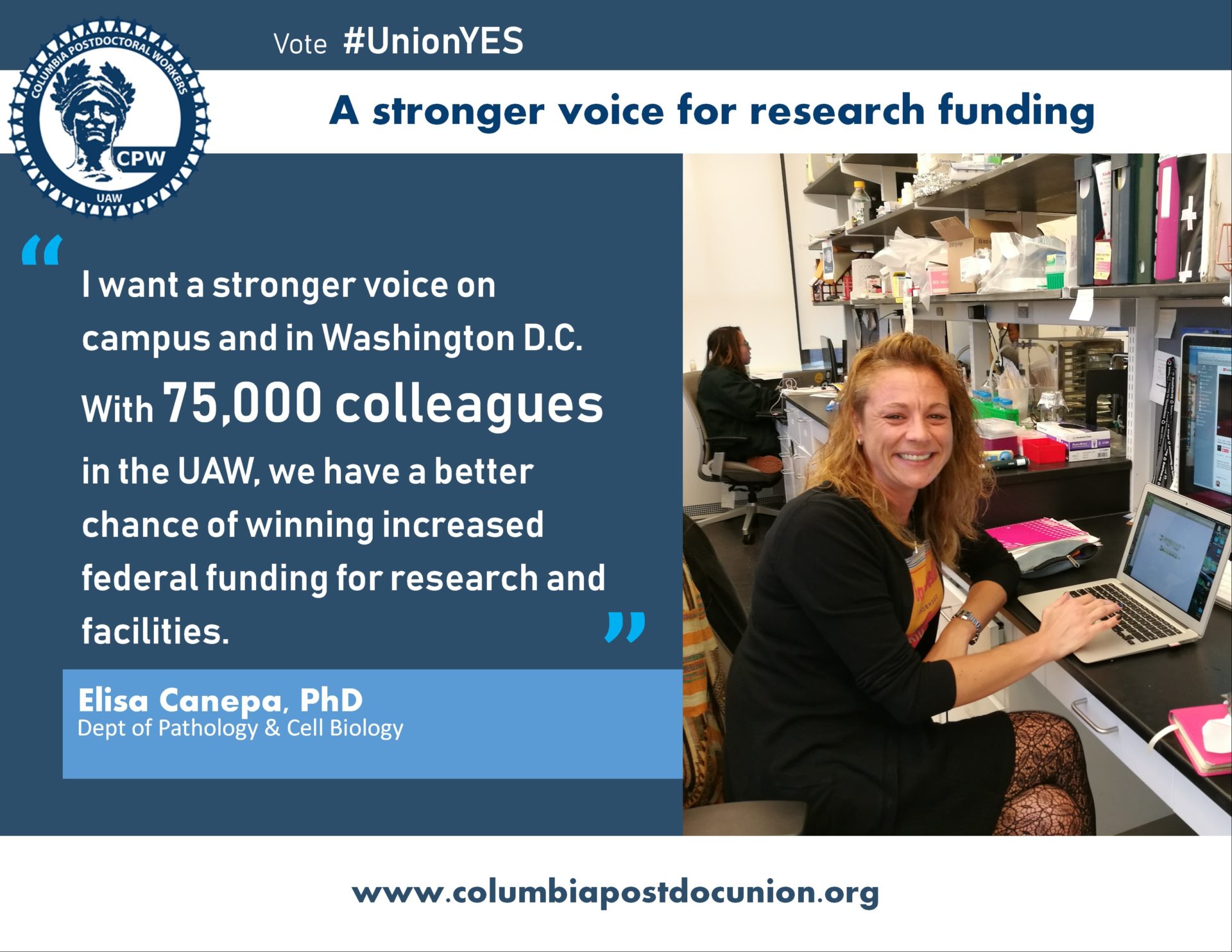 After seven years of unionization, a Rutgers dean refuted previous fears that unionization would lead to fewer postdoc positions or damage relationships between faculty and postdocs, saying in a recent Inside Higher Ed article that “this relationship has turned out to be a very good one for us.” In fact, as he reports, the University not only continues to hire at least as many postdocs as before, but the postdoctoral affairs office has more time to help postdocs with professional and career services because they spend less time on employment issues now clarified in the union contract. The number of postdocs at the University of California has also grown since they first unionized in 2008.

Read about the growth of postdoc unions in Inside Higher Ed 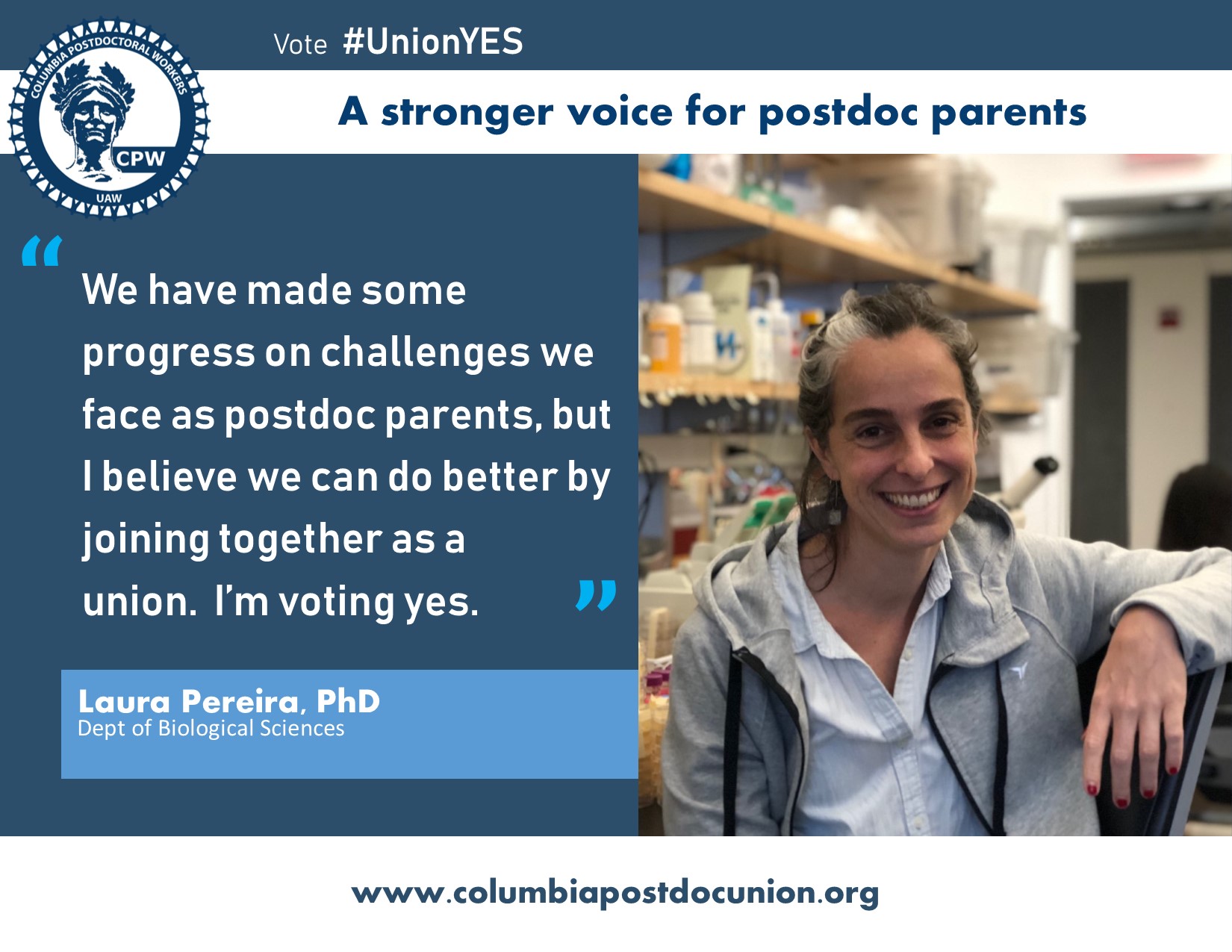 Inequalities–including those based on gender, race and immigration status–continue to create barriers for many of the most talented to enter the academic and scientific workforce. And existing systems of recourse for problems like sexual harassment too often fail and can take years. Though much work remains to be done, postdocs, graduate students and adjunct faculty in the UAW have helped make progress on many of these issues, both at the bargaining table and in policy advocacy through the union. At the University of Connecticut, for example, a graduate assistant worked with her union to successfully resolve a major sexual assault and harassment complaint in three months, whereas it has literally taken decades for complaints to be addressed at Columbia.

“The Silence Surrounding Sexual harassment in Labs at Columbia”

We are excited to vote yes for our union on October 2nd and 3rd!
Columbia Postdoctoral Workers (CPW-UAW)

But our lack of a real voice with the central Columbia administration means people far away from our labs and offices can decide unilaterally whether we receive fair salaries that match the high cost of living and housing in New York City, or whether we have fair recourse on issues such as sexual harassment, bullying and discrimination. This lack of a voice creates uncertainty that hinders our ability to focus on quality research and has allowed Columbia to offer compensation that falls behind other NYC research institutions.

If a majority of us vote “yes” for our union, Columbia administrators would be legally obligated to negotiate postdoc conditions with our elected bargaining committee and to commit any agreements we reach, regarding improvements or maintaining current benefits, into a binding contract.

We would join thousands of other academic workers who have chosen to affiliate with the UAW to not only to make improvements in their workplace, but also to have a stronger political voice nationally to advocate for important issues like expanding federal science funding and immigrant rights. Unionization of postdoctoral researchers has resulted in tangible improvements at many research universities. Postdocs at the University of California have had a union for over 10 years and most recently the postdocs at the University of Washington and University of Connecticut have formed unions and started bargaining.

We, the undersigned urge our colleagues to participate in our historic election and vote ‘yes’ to certify CPW-UAW as our union so we can work together to bargain a fair contract with Columbia.