3,000 Graduate Workers and 2,000 Postdoctoral Researchers are Bargaining for Quality, Equity and Inclusion at Columbia 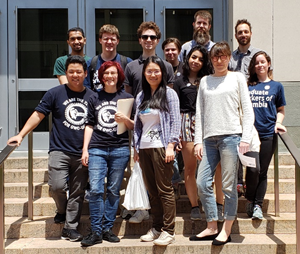 Following years of refusing to respect the rights of graduate student workers and postdoctoral researchers, Columbia agreed to recognize the unions for both units and began bargaining in February 2019. Unfortunately, after nearly one year of negotiations, Columbia has moved very slowly toward reaching fair agreements that reflect the tremendous value these workers bring to New York City’s premier research university: competitive compensation, real recourse for harassment, discrimination, and bullying, and adequate health care. The workers seek contracts by April 6, 2020, the expiration date of a no-strike commitment made in the union recognition agreement for both units.

Columbia’s historic decision to recognize both unions followed years strong majority support from workers and broad support from hundreds of campus, community and political allies. Pressure to respect these workers’ rights escalated during a massive week-long strike graduate workers in late April 2018. The 1,500-strong picket lines drew coverage in the New York Times, Washington Post, and NPR. As graduate workers prepared for further strike action in Fall 2018, and postdoctoral researchers voted by an overwhelming 68 percent for unionization in their own National Labor Relations Board (NLRB) election, Columbia agreed to recognize both unions. Columbia joins ten private universities – including Harvard, Brown and Cornell in the Ivy League and NYU and The New School in New York City – who have agreed to bargain with graduate workers who vote for unionization and is now the first private university to bargain with a postdoctoral workers union.

Columbia is Rejecting Proposals to Enhance Quality, Equity and Inclusion

Fair and Competitive Postdoc Compensation will Enhance Quality Research as Columbia Has Fallen Far Behind NYC Research Institutions and the City’s High Cost of Living. University leaders at Rockefeller, Mt. Sinai, and Memorial Sloan Kettering have all chosen to increase minimum salaries to at least $58,500 for postdoctoral researchers while Columbia maintains a base salary of $50,004 per year. The Columbia salary gap hurts researchers in every classification, with individuals who have won their own fellowship suffering the worst, and increasingly hinders its ability to attract and retain the best and brightest from across the globe. 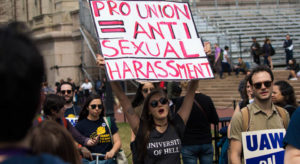 Stronger Protections Against Harassment, Discrimination, and Bullying Will Make Columbia More Inclusive. Columbia continues to reject a proven, timely path to justice for those who experience sexual harassment, assault, and bullying on campus. A 2018 National Academies report says academia is “second only to the military” when it comes to pervasiveness of sexual harassment. In recent years, there has been at least three major reported cases of harassment and assault at the university, illustrating the University’s ’s longstanding failure to prevent and address the problem. With models of success at other universities, graduate workers and postdoctoral researchers at Columbia seek a prompt and fair process to address sexual harassment, one of the major barriers to gender equity in the academy. Over 2500 Columbia graduate and postdoctoral workers signed onto an open letter for Columbia to agree to such a process in bargaining.

Stable and Affordable Health Care Benefits Will Enhance Equity and Quality Research. Columbia unliterally cut the best healthcare option provided to graduate workers, hurting those who are living with a chronic medical condition, illness or disability. So far, Columbia has refused to address this major cut in benefits in bargaining. Columbia also forces postdoctoral researchers who secure their own “fellowship” award to take a health plan that is far inferior to all other postdoctoral researchers–in other words, Columbia penalizes academic success. Reversing this trend and agreeing to fair, stable benefits for all graduate workers and postdocs will enhance equity and quality research.

The Message to President Bollinger and the Columbia Administration

Urge the Columbia administration to respect the work graduate workers and postdoctoral researchers provide to Columbia. Direct the university’s bargaining committee to engage in respectful bargaining and fair and equitable contracts by April 6. Fair contracts will enhance their employee’s ability to focus on quality teaching and research, enable Columbia to recruit the best and brightest from across the globe, and therefore continue to build Columbia’s reputation as a leader in innovation and grow our city and state economy. 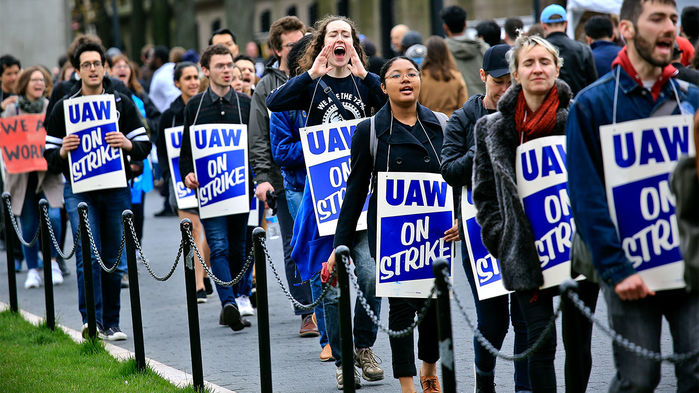